Autism is a genetically based human neurological variant. The complex set of interrelated characteristics that distinguish autistic neurology from non-autistic neurology is not yet fully understood, The subjective experience of autistic people tends to be more intense and chaotic than that of non-autistic individuals, as the impact of each bit of information tends to be both stronger and less predictable on both the sensorimotor and cognitive levels.

Autism is a developmental phenomenon, meaning that it begins in utero and has a pervasive influence on multiple levels of development throughout the lifespan. Autism produces distinctive, atypical ways of thinking, moving, interaction, and sensory and cognitive processing. Autistic individuals also vastly different from one another, with some exhibiting exceptional cognitive abilities despite facing challenges in social interaction.

Autistic individuals frequently experience difficulty in the realm of social interaction. While autism is frequently misconstrued as a set of social and communication “deficits,” many challenges faced by autistic people are the results of living in a society designed around the sensory, cognitive, developmental, and social needs of non-autistic individuals. Challenges meeting the social expectations of non-autistics often result in social rejection, which further compounds social difficulties and impedes development.

How prevalent is autism?

According to current estimates, between one and two percent of the world’s population is autistic. While the number of individuals diagnosed as autistic has increased continually over the past few decades, evidence suggests that this increase in diagnosis is the result of increased public and professional awareness, rather than an actual increase in the prevalence of autism.

What support is available?

Autism is still widely regarded as a “disorder,” but this view has been challenged in recent years by proponents of the “neurodiversity” model, which holds that autism and other neurocognitive variants are part of the natural spectrum of human biodiversity.

The early lives of autistic individuals often involve repeated traumatic experiences of social rejection and abuse (by family, professionals, peers, and others). As a result, many autistic individuals suffer from diagnosed conditions such as anxiety (particularly social anxiety), posttraumatic stress disorder (PTSD), and depression, as well as difficulties with interpersonal connection and social adaptability.

Conventional prescription medications developed for non-autistic individuals are frequently ineffective or have unpredictable effects for autistic individuals, and cognitive differences between autistic clients and non-autistic therapists can interfere with conventional psychotherapy by making therapeutic rapport more difficult. Given the absence of established, effective treatment options, the search for new supportive treatments for psychological distress is of great importance in improving quality of life for autistic adults.

—Adapted with permission from “What Is Autism?” by Nick Walker (2014) 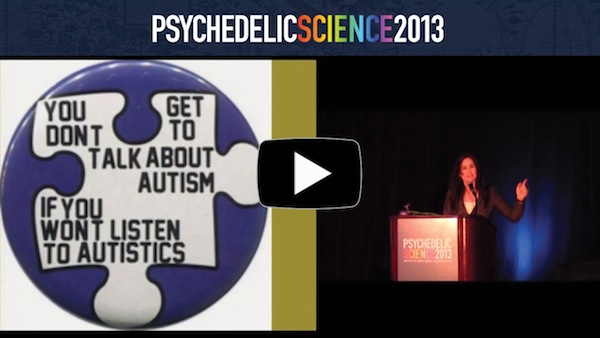 We need your support to complete this study

The Multidisciplinary Association for Psychedelic Studies (MAPS) is a 501(c)(3) non-profit research and educational organization.